2An Apple That Never Turns Brown

The Arctic Apple is one of the first gene edited foods, and it has already emerged in some stores across the United States, which are apples sold pre-sliced and ready to eat. When these altered apples are exposed to air, they do not turn brown – not even when rotten.

Biotech companies like Intrexon, the company who produces the Arctic Apple, think that this technique will lead to less wasted food. Stat News noted that these foods are being brought to market with minimal understanding of their potential environmental and health risks. The GMO industry is getting a free pass with no required safety assessment or regulatory oversight.

There’s a reason that an apple turns brown, and some scientist are convinced that natural browning enzymes play a crucial role in fight off pests and diseases, meaning farmers will likely have to increase their use of petsicides to grow these mutant apples. Due to the effects of these new GMO techniques not having yet been thoroughly investigated, they could mess up gene expression in human cells, and then in turn pose a serious threat to public and environmental health.

On top of the gene-splliced apples, other gene edited products are on their way to store shelves. These include non-GMO labled canola oil, modified to be able to endure more pesticides, gene altered salmon which grow faster, and lab made vanilla derived from genetically modified yeast.

The door for unethical practices and misuse is hanging wide open, due to potential risks, a lack of long term safety assessments, and little to no regulation. Thankfully at least, the FDA quietly announced that it will give citizens a chance to voice their concerns and ask questions about this new generation of genetically modified foods. 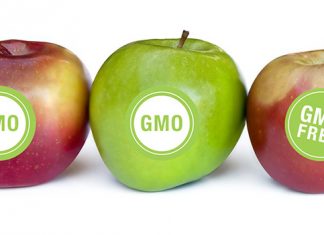 jerome - 02/27/2017
0
Check Your Apples, A New Dangerous Type of GMO Being Unleashed into Food Supply There aren't many topics presently in the science world as intensely...